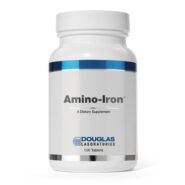 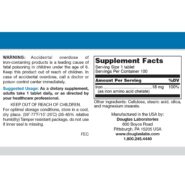 Amino-Iron, provided by Douglas Laboratories®, is a patented, nutritionally functional iron amino acid chelate (iron bis-glycinate) with documented high bioavailability, excellent tolerability, and low toxicity. Each 18 mg tablet of Amino-Iron supplies 100% of the daily requirement (US RDA) of iron for adults and children 4 or more years of age.

FUNCTIONS Iron accomplishes its major function of oxygen transport as a component of two different transport molecules: hemoglobin in red blood cells and myoglobin in muscle. As a cofactor for a large number of enzymes and enzyme systems, iron is essential for energy metabolism. Iron is the cofactor of most of the enzymes of the Krebs cycle, and it is an electron carrier in the cytochromes. Healthy subjects with adequate iron status absorb between 5 and 10 % of dietary iron from foods. Iron absorption is regulated by the body, increasing during iron deficiency. Dietary factors also influence iron absorption efficiency. For example, ascorbic acid (vitamin C) increases and phytic acid (found in whole grains) decreases its absorption. Most of the absorbed iron is used for hemoglobin synthesis. Excess iron is stored as ferritin in liver, spleen, bone marrow and other organs. The body has a limited capacity to excrete iron. With advancing age, iron often accumulates in tissues. Excessive amounts of unbound iron can act as a catalyst of free radical damage and membrane lipid peroxidation, leading to a variety of degenerative, pathologic changes. Men over the age of 30 and postmenopausal women have a tendency to accumulate iron in tissues. Thus, once iron stores have been replenished, iron supplementation should be discontinued, unless bleeding or other causes of iron loss are present. Iron excretion occurs in feces, skin, and urine. Many menstruating women excrete significant amounts of iron through normal menstrual blood losses. Pregnancy and lactation increase iron requirements two- or three-fold. Adequate amounts of iron are also needed to support growth, especially during growth spurts, e.g., during early infancy or during the growth spurt of adolescent males. Iron deficiency occurs in three stages. In the first stage of iron depletion, iron stores are diminished, as reflected in low plasma ferritin levels, but no functional impairment is present. The second stage is characterized by close to normal red cell hemoglobin although its production is already impaired. Work capacity may be impaired. In the third stage of iron deficiency anemia, total blood hemoglobin levels are below normal, and red cells appear small and pale. Iron deficiency anemia is associated with low work capacity (tiredness), apathy, irritability, reduced physical performance and decreased immune function. Amino-Iron is efficiently absorbed and utilized by the body. Studies have shown that the iron bis-glycinate of Amino-Iron has a very low toxicity when compared with conventional iron salts.

INDICATIONS Amino-Iron may be a useful nutritional adjunct for individuals who wish to increase their intake of iron.

As a dietary supplement, adults take 1 tablet daily, or as directed by your healthcare professional.