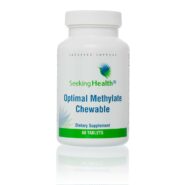 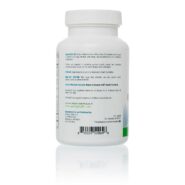 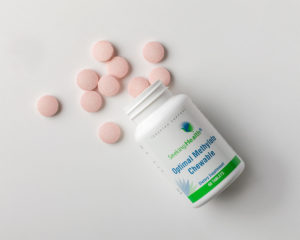 Chew 1 tablet with or without food. Tablets may be cut into halves or quarters if a lesser dose is desired and taken throughout the day. Do not take within 5 hours of bedtime as it may interfere with sleep. Use as directed by your healthcare professional.

Children and pregnant or lactating women should consult their healthcare professional prior to use. Do not use if tamper seal is damaged. Potential side effects of Methylate are often alleviated by eating food and/or taking one capsule of Niacin (50 mg).*

Keep closed in a cool, dry place out of reach by children.
Serving Size: 1 Tablet
Servings Per Container: 60

Optimal Methylate Chewable by Seeking Health provides a lower dose of methylation support for those who are sensitive to the higher doses found in most methyl support supplements. We’ve included active forms of folate, vitamin B12 and nine other targeted nutrients to help support and optimize healthy methylation processes throughout the body.*

Methylation is an extremely important biochemical reaction that’s happening every second in every cell of the human body. Methylation plays many roles in the body, not limited to gene expression, detoxification, the production creatine and phosphatidylcholine, and maintaining healthy levels of glutathione, histamine, and homocysteine.

Many people struggle with adequate methylation, such as those with the MTHFR genetic polymorphism, particularly the C677T variety. The methylation cycle is also sensitive to oxidative stress and free radicals, especially hydrogen peroxide. Hydrogen peroxide is generated during times of infection, mental stress and detoxification, to name a few.

When people begin supporting their methylation cycles, many discover the dosages available in most methylation support supplements is too strong, leading to symptoms of overmethylation including headaches, irritability, insomnia, runny nose, body pain, and itchy skin. Most methylation supplements contain higher levels of folate and vitamin B12, but these are not the only nutrients needed to support methylation, and too much of them can lend to unfavorable symptoms.

Optimal Methylate Chewable was designed by Dr. Ben Lynch to address the need for an easy-to-take vitamin that supports methylation quickly, comprehensively, and gently. The lower amounts per serving allow you to optimize rather than overwhelm the methylation cycle. By supporting methylation gently, common unpleasant side effects of taking methylation support may be lessened or prevented completely.*

The targeted ingredients found in Optimal Methylate Chewable are designed to provide the following benefits and actions:*